- The Van Dyke, famously worn by Johnny Depp and David Beckham, is the UK’s trendiest beard style, seeing an increase of 24.5% in interest over the past decade.

- The Chinstrap and Handlebar Moustache round up the top three most popular beard styles, seeing a 14.88% and 12.61% increase in interest respectively since 2010.

- The Oasis influence is still as prominent as it was during the 90s in Manchester, with residents in this city preferring sideburns over any other style.

- In far Northern Scotland, the beard reigns supreme with the town of Wick seeing 7% more interest in beards over shaving than anywhere else in the UK.

- Since 2014, the beard has been more popular than a clean shave, with interest peaking every November, and growing 66% during the first lockdown this year. 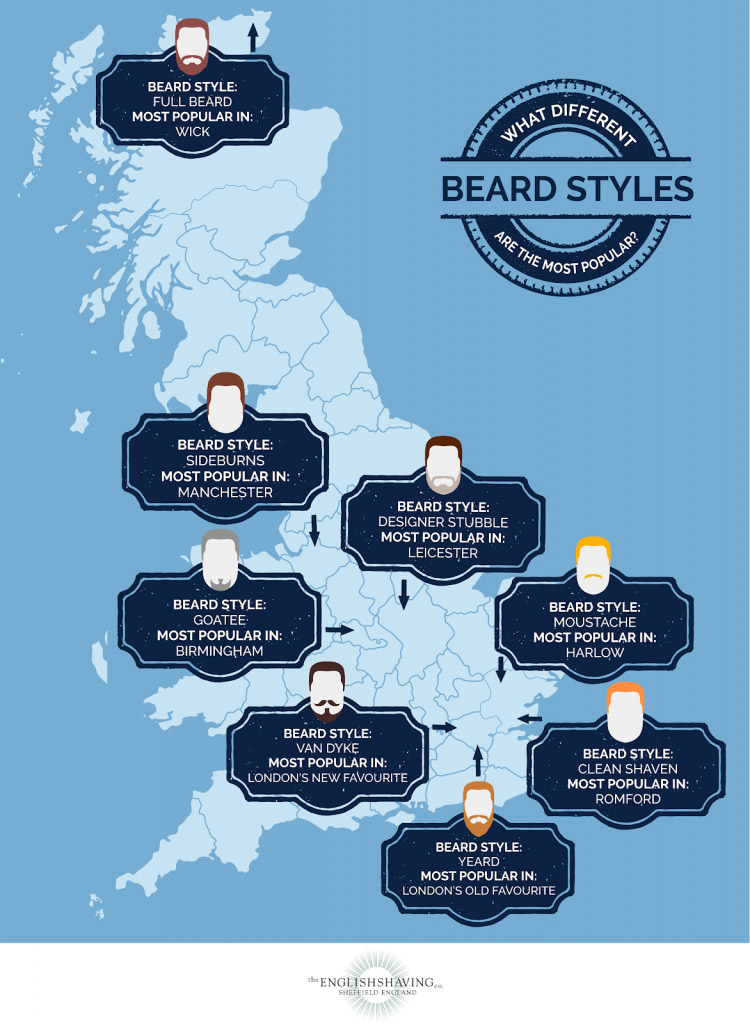 UK beard care and shaving specialists The English Shaving Company have analysed search interest in different types of facial hair over the past decade, to reveal which beard styles are trending, where each style is the most popular, and the UK’s favourite heading into 2021.

The Van Dyke is the UK’s new favourite beard style

Peaking in popularity this October, the Van Dyke is the UK’s trendiest beard, rising 24.5% in interest since 2010 - 10% more than the chinstrap which ranks in second place. It has also just overtaken the Yeard as London’s favourite beard style.

The Van Dyke is a style of facial hair combining a moustache and goatee, named after the 17th-Century painter Anthony van Dyck. Donned by popular figures throughout history, this beard style is associated with influence and fame. Some of these notable people include King Charles I, Buffalo Bill and even Vladimir Lenin.

A revival of the Van Dyke in Hollywood has brought this style back into the spotlight, with Pierce Brosnan, Christian Bale, David Beckham and of course, Johnny Depp making a statement with this classic look.

The chinstrap beard is the UK’s runner-up beard favourite

Ever since a resurgence in 2010, the chinstrap beard has been steadily rising in popularity, increasing by 14.88% in interest over the past decade. This beard style runs along the jawline, connecting from ear to ear. As the chinstrap outlines the jaw, it flatters and accentuates the natural face shape, making facial features appear more defined.

This facial hair type can be seen on many famous UK artists and sportspeople, gracing our stages with Stormzy and race tracks with Lewis Hamilton.

In third is a Movember staple - the handlebar moustache, seeing an increase in interest of 12.61% over the past decade. This style is one of the harder moustache types to master, as the ends of the moustache need to be stylised and curled into a bicycle handlebar shape.

Associated with the Wild West and popular in World War 1, this stately and old school beard style is now seen paired with a ragged haircut and clothing choice as an ironic, hipster fashion statement.

The soul patch… and the monkey tail trail behind

To create a monkey tail beard, style a sideburn so that it wraps under your chin, and up the other side of your face, connecting with the moustache. This look is certainly unique, and when done right, looks very much like a monkey tail tickling your nose. Despite seeing lots of searches and interest across the UK over the past decade, we don’t think it’ll catch on over the next ten years. 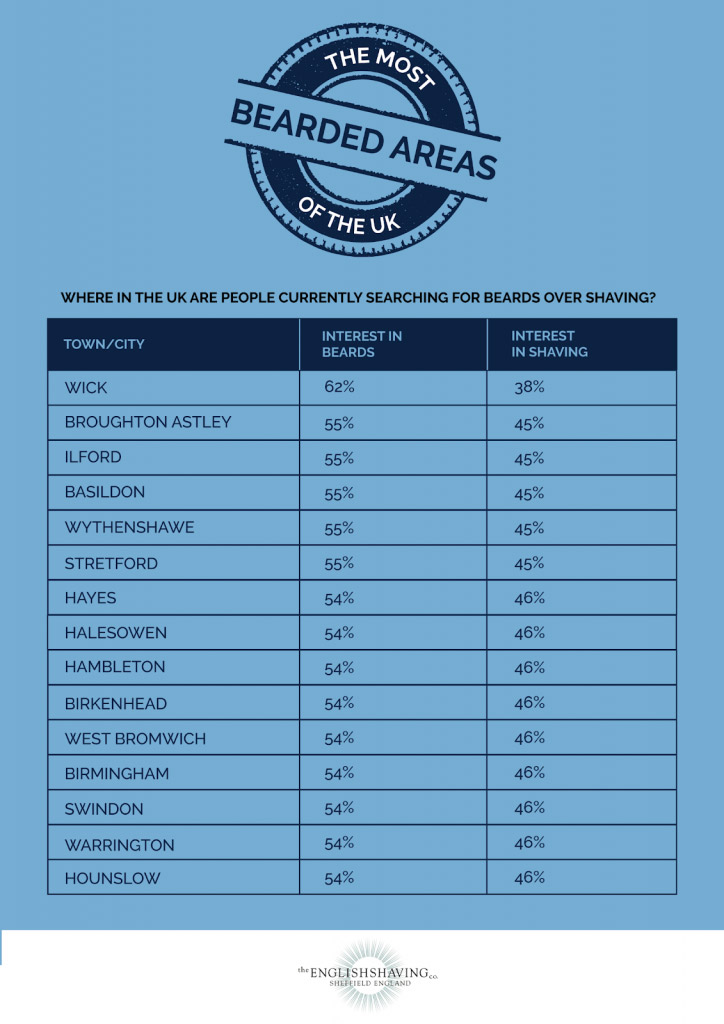 Where are different beard styles the most popular across the UK?

If you think beard styling is as simple as grooming a Van Dyke - it’s not that easy. Different areas of the UK rock different types of beard, so check what’s trending before clocking into work with your new facial hair.

The moustache - a timeless icon that continues to see massive interest every November - is the most popular style in the Essex town of Harlow.

With more variations than any style of facial hair, moustaches come in many shapes and sizes. Trending styles include handlebar and pencil moustaches, both of which are currently more popular than the standard moustache.

Manchester is the top spot for Oasis-esque sideburns.

The Gallagher brothers haven’t just left a legacy of almost 20 years of music in the UK. They also still influence current trends in their hometown. Here, you’ll find sideburns are the most popular form of face fuzz, often combined with a mod haircut for that classic 90s Oasis look.

The Yeard has dropped out of popularity in London and across the UK since 2017.

The Yeard has been a trending style of beard for most of the past decade. Often seen as a wilder, more hip beard, the Yeard is, as you may have guessed, a beard grown for an entire year, with minimal trimming and shaving throughout.

In Wick, Northern Scotland, the beard is king.

The full beard is by far the most popular facial hair in the town of Wick, Scotland. Not only is the full beard most popular here, but more residents surf the topic of beards over shaving than in any other area of the UK. Overall, 62% of Wick residents show more interest in beards than shaving, with the next few top locations, such as Broughton Astley, a massive 7% behind this figure at just 55% versus 45% beard to shaving interest.

Wick, deep in the Highlands, is one of the most northern points in the UK and lies just 15 miles south of John o’Groats. With roots as a Viking settlement, before becoming a town famed for fishing and whiskey, Wick is the perfect capital of the UK for the no-frills full beard.

Over the past decade, the UK’s interest in beards has overtaken that of a clean shave. Despite the topic of shaving seeing significantly more interest before 2014, ever since then beards have dominated both our searches and faces.

Unsurprisingly, every November and December see a doubling in beard interest, with only a slight increase in shaving interest. Generally, people are most interested in shaving during the summer months, where that winter face warmer might become more of a nuisance than of benefit. April 2020 saw a massive peak in beard interest, alongside a smaller spike in shaving interest, as UK residents decided whether or not to grow a beard during the first few weeks of lockdown.

Tania Fulton, Spokesperson for The English Shaving Company: “With the amount of time that UK residents have spent indoors this past year, there have been plenty of opportunities to experiment with facial hair. Lockdowns and working from home have meant there’s no need to worry about that patchy phase of initial growth, nor what coworkers or relatives might think.”

“Instead, men can take the time to grow out their stubble and try out different styles.

“The results are interesting, as lower maintenance, scruffier looks such as the Yeard have fallen out of popularity - the opposite of what you might expect from months at home in joggers.

“Instead, more stylised beards such as the Van Dyke are rising in popularity. This could be due to facial hair fans having more time to sculpt the perfect style, or as a result of workers experimenting with their looks while still wanting to look presentable for work calls.

“Either way, across the UK beards are now more popular than shaving so we’re sure that when restrictions are lifted you’ll be bumping into more beards than ever before.” 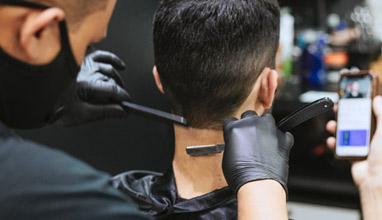 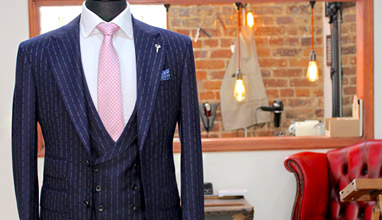 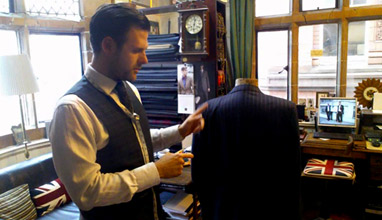 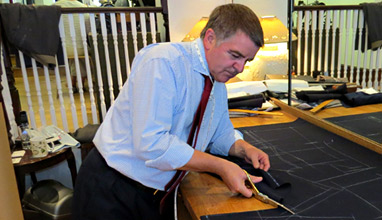 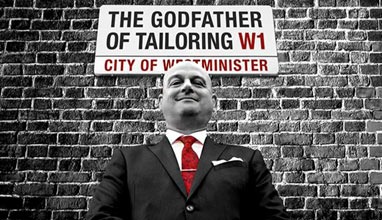 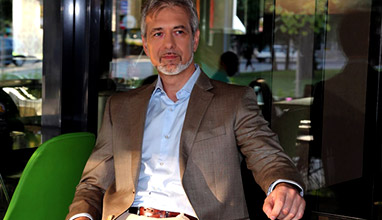